History of The Weatherford

For more than 100 years, the Weatherford Hotel has punctuated the Flagstaff skyline, enduring many changes and historical milestones. 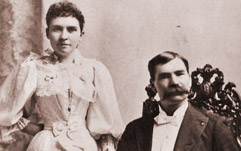 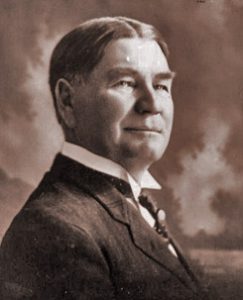 The first mention of Texas-born John W. Weatherford in Flagstaff’s newspaper of the time, The Coconino Sun, describes the young deputy riding into town. He was coming here to dispel rumors of killing among the posse that had been trying to settle the Tonto Basin Graham-Tewkesbury feud, which was later immortalized in Zane Grey’s To the Last Man. Arizona is a territory in the Wild West. The Aztec Cattle Company, the Hashknife outfit, has just about finished moving 33,000 longhorn into the region, with cattle rustlers in their dust. Denis Mathew Riordan — Indian agent, lumberman, railroader, and philanthropist — has just purchased the Ayer Lumber Company. Timber, cattle, and the railroad rule the economic landscape. It is 1887 and Flagstaff is an island of commerce and culture in this changing land. The AT&SF railroad workers had already brought the rail to Flagstaff on on their way to California and San Diego.

Weatherford is noted as a pioneer of this civic amenity in Flagstaff.

In 1896 and 1897, fires plagued the city. Ordinances were enacted requiring any new construction to be of brick or stone. In 1898, Weatherford is granted permission to “construct a brick or stone business block on the southwest corner of Leroux Street and Aspen Avenue and … a sidewalk along the south side of Aspen Avenue from Leroux to Beaver Street.” In the late 1890s, Flagstaff streets were unpaved. They were dusty in the summer and muddy in the spring. Constructing sidewalks — a community upgrade — helped grease the wheels of city paperwork.

By April, they dug out the basement. Construction for the main dining room of Charly’s restaurant broke ground in February 1899. On January 1, 1900, the $10,000 Hotel Weatherford opened its doors to the public. It was the biggest and best; according to The Coconino Sun, “There is no finer hotel in the whole southwest.” Of Weatherford they say, “He is careful of the interests of his guests and every comfort obtainable is afforded them.” 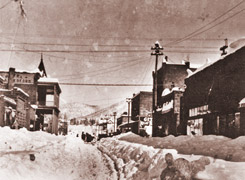 In the years following the opening of his hotel, John Weatherford prospered. He built an opera house, the Majestic. But a freak snowfall on Friday, December 31, 1915, dumped 5 feet of snow, flattening many buildings, including the Majestic. Undaunted, Weatherford decided to rebuild; the New Weatherford Opera House — known today as the Orpheum — opened its doors on August 31, 1916. By December, this venue hosted the first and only elephant to appear on stage in Flagstaff (or anywhere in Arizona, for that matter).

Transcontinental telephone service reached Flagstaff in about 1910. To se

rve the telephone company, a small brick building with a three-bay façade of red Coconino sandstone was erected south of the Hotel Weatherford, becoming part of the Weatherford block.

In 1916, following in the footsteps of Spencer Penrose, who had begun building a highway to the summit of Pikes Peak, John Weatherford obtained a permit for the San Francisco Mountain Boulevard. The Coconino Sun ran the headline:

“Will Bring Vast Empire to View by Road to San Francisco Peaks — J.W. Weatherford Secures Right of Way From Government to Build a Toll Road From Flagstaff to Peaks. Good for Thirty Years.”

His idea included a 5-acre concession at the top and a plan for “mounting a powerful telescope that will be able to bring six states into view — New Mexico, Colorado, Utah, Nevada, California, Arizona, and possibly a glimpse of Texas.”

“The projected route was beautiful but daunting. From a tollgate near Flagstaff’s municipal reservoir, the road was slated to proceed north past Arnold Spring (present day Aspen Spring) and Schultz Spring, climb a series of switchbacks to the saddle between Doyle and Fremont peaks. From this point, the road would enter the interior valley of the peaks, the inside flank of Fremont Peak, crossing Freemont Saddle, and beginning the steep ascent along the interior of Agassiz Peak. Finally it would follow the rocky spine leading to the top of Mount Humphreys.”

By mid 1926, construction crews had completed 10.4 miles of steep narrow road — enough for Weatherford to stage a grand opening ceremony. At 9:30 on the morning of August 19, local drivers lined up on Leroux Street as Boy Scouts distributed souvenirs for the occasion. Some 170 automobiles made the

trip to Fremont Saddle, where the Flagstaff IOOF lodge members served a picnic luncheon. Dr. Earl Slipher of Lowell Observatory set up a telescope that allowed sightseers to gaze over the Grand Canyon and into six different states.

Like the Pikes Peak project, the project eventually ran out of steam, and the entire venture was purchased by the U.S. government in 1942 for $15,500. The tollhouse is still there.

A time of transition from frontier to civilization.

People like Jefferson “Bear” Howard were hunting bear for a living while the new Lowell Observatory was attracting a few science types. Burt Mossman, who later became the first captain of the Arizona Rangers, was trying to subdue the outlaws and rustlers of the Hashknife outfit. Northern Arizona Normal School (NAU) opened its doors with “twenty-three students, one professor, and two copies of Webster’s International Dictionary bound in sheepskin.”  In the next few years, many famous — and perhaps infamous — people would pass through the doors of the Weatherford: Theodore Roosevelt, William Randolph Hearst, and Thomas Moran among them.

And then there was Charles Jesse “Buffalo” Jones. In 1901, Jones was appointed by his friend Theodore Roosevelt as the first game warden of Yellowstone National Park. He was an ex–buffalo hunter turned buffalo conservationist. In 1906, Jones established a ranch and game preserve at House Rock Valley, at the north rim of Grand Canyon, where his efforts to maintain buffalo stock included crossbreeding them with cattle to produce “cattalo.” He also tried to “break bison to the harness” and use them to pull wagons, succeeding with a few animals. Jones was often pictured in a buckboard pulled by “Lucky Knight.”

In 1907, on a fundraising tour in New York, Jones spoke of the West, the buffalo, the mountain lions… and adventure. Among the audience was a little-known dentist from Ohio — a fledgling writer and a newlywed who had spent his honeymoon at the Grand Canyon just the year before. His name was Zane Grey.

Grey, intrigued by “the west” and moved by Jones’ lecture and experience of the Grand Canyon, wrangled a visit to Jones’ ranch. The 1-month horseback trek to the ranch certainly must have been an awakening for this green New York dentist. But on his first visit, he ended up helping Jones rope mountain lions, from which his Roping Lions in the Grand Canyon resulted. On his return to New York, Grey wrote about his experiences and Jones’ conversion to conservationism in his novel Last of the Plainsmen. Grey’s second trip out West visit to Jones in 1908 provided material for his first commercial success in 1910, The Heritage of the Desert, and the blockbuster classic that made him famous 2 years later, Riders of the Purple Sage. Grey went on to shape the archetypical American cowboy and the way the world would perceive the American West. It is a curious footnote that he was patterned after a conservationist.

Henry Taylor and Pamela “Sam” Green, proprietors of the Hotel Weatherford, have been preserving this historic landmark for over 30 years. An Arizona native, Henry Taylor, the Weatherford’s owner, was raised in the lodging business. His family owned Holbrook’s Brunswick Hotel, which became the Arizona Hotel and later the Arizona Rancho Motor Lodge in the late 1920s, when Route 66 came through town.

In May 1975, Henry and his brother Lloyd purchased the Weatherford. At the time, they had a contract with the State of Arizona to house rehabilitation clients who were receiving physical therapy and job training. The Weatherford Residential Facility, which lasted 2 years, was eschewed by locals even though it served a positive niche in the community. Unfortunately, there just wasn’t enough money from the State contract; the hotel needed a different source of revenue.

The Taylors saw an opportunity in 1977, when the space that now houses Charly’s main dining room and the Exchange Pub became available. By 1981, the Taylors (now Henry and his wife Sam, who had bought out Lloyd) had remodeled the first floor and opened Charly’s Pub, which became a major entertainment venue in Flagstaff’s historic downtown district. The building served its original pu

rpose until at least the 1930s, when it underwent the first of two modernizations. The first entailed adding stucco to the sandstone façade in a modified art-deco style. The second, in the 1950s, added aluminum siding. This building was known for some years as the Le Brea Café. Its façade was restored in 1995 to the appearance of the original 1909 Telephone Exchange. Its elegant simplicity and casual ambience is reminiscent of Flagstaff at its turn-of-the century heyday.

Another opportunity arose in 1978, when a local church decided to close its hostel for international travelers and asked Henry to take over this enterprise. He said yes, and European travelers started coming. They found the hotel’s character and its proximity to the bus station much to their liking — a link to the mythic west that was both accessible and affordable.

The 1990s marked a period of change for the Weatherford. In 1990, Sam and Henry decided to move into fine dining. They began upgrading their rooms and transitioning the hostel into a hotel. A few years later, the City began its improvements to downtown Flagstaff — a project that lasted 2 difficult years and restricted car and bike traffic. The hotel received neither relief nor compensation for this drain on its resources, and the next few years were a struggle. However, grant monies became available for restoring the Weatherford’s balconies. As a result, the Zane Grey Ballroom opened in February 1997; the barroom opened a few years later.

WE LOVE TO SHARE NEW OFFERS AND EXCLUSIVE PROMOTIONS