About The WeatherFord Hotel 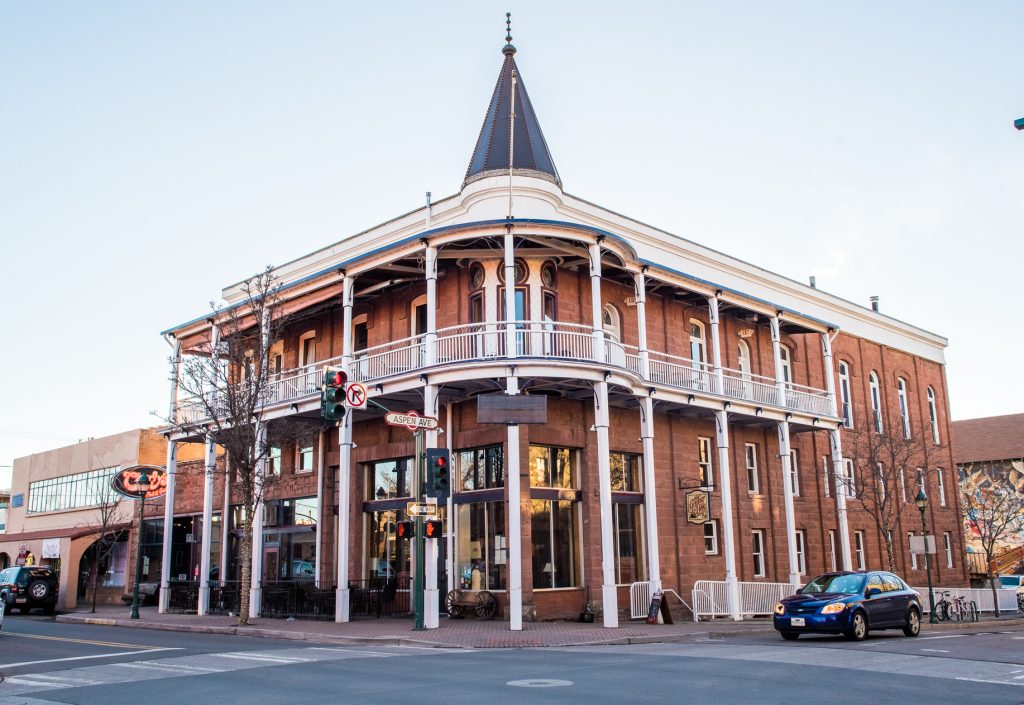 LOOKING BACK IN HISTORY

Typical of most frontier towns in the late 19th century, early Flagstaff was a victim of numerous disastrous fires. Following a particularly bad series of blazes in 1897, the city passed an ordinance requiring all buildings in the business area to be built of brick, stone, or iron. Among the new buildings appearing in 1897 was the predecessor of the Weatherford Hotel, built by John W. Weatherford (1859-1934), a native of Weatherford, Texas. The original structure housed a general store on the first floor and living spaces for the Weatherford family upstairs.

John Weatherford soon realized that tourism would offer an economic boom to the growing town, largely due to a new rail connection to the Grand Canyon, 80 miles to the north. In March of 1899, Weatherford began construction of a three-story modification of his building and there was a grand opening for the Weatherford Hotel on New Year’s Day 1900. For many years, the Weatherford Hotel was the most prominent of the hotels in Flagstaff, entertaining guests such as artist Thomas Moran, publisher William Randolph Hearst, and western author Zane Grey. Grey’s novel “The Call of the Canyon” was written in an upstairs room, now part of the Zane Grey Ballroom.

A beautiful sunroom occupied part of the top floor and was used for dances and parties, while numerous civic groups engaged the rooms downstairs. A three-sided balcony, visible in a 1905 photograph, was damaged by fire and removed in 1929, along with the original cupola gracing the façade of the building. At various times, the hotel housed a theatre, restaurant, billiard hall, and a local radio station.

Henry Taylor, the current owner, purchased the hotel in 1975 with his brother, attempting to save it from potential demolition. This was at a time when downtown Flagstaff was suffering from an acute state of decline as a commercial district. Since 1980, Henry and his wife Pamela (Sam) Green have been continually renovating the structure, with a goal of restoring it to its original grandeur. In 1978 and 1981, Charly’s Restaurant and Charly’s Pub were opened on the first floor with the restoration of the central “fireplace room” and lobby, and utilization of spaces that had originally contained private hotel rooms. For several years, the upper floors were home to a youth hostel.

When transcontinental telephone service first reached Flagstaff about 1910, a small brick building with a three-bay façade of red Coconino sandstone was erected south of the hotel to serve the telephone company, becoming part of the “Weatherford Block”. That building served its original purpose until the 1930’s when it underwent the first of two “modernizations”. The sandstone façade was stuccoed over in a modified art-deco style and the building became the La Brea Café. In the 1950’s, current fashion resulted in aluminum siding and for many years the Wong family operated The Weatherford Café, an iconic Chinese-American restaurant. In 1995, the Taylors restored the original appearance of the telephone exchange and renamed it The Exchange Pub. The casual ambience of the Exchange Pub and Charly’s dining room next door are reminiscent of Flagstaff’s heyday at the turn of the century. Original photographs and memorabilia enhance that reflection of the town’s history.

In the late 1990’s the Taylors were awarded one of the largest commercial grants in Arizona history, intended for the restoration of the original balconies. The third floor, Zane Greys Ballroom, was developed first and opened in 1997, in preparation for the reconstruction of the balconies. The first stage of reconstruction the wrap-around porches was completed in December, 1998. In the building’s basement, The Gopher Hole was opened in 2014, recreating an original club that occupied that space. This initiated the complex engineering feat of reinforcing the interior floors of the entire building. In June 2016, the remainder of the restoration of the structure of the building was completed with stacking steel posts and beams through the first and second floors, and the building became fully operational with the restoration of 17 hotel rooms. These rooms retain the original claw-foot tubs, showers, and other fixtures. Downstairs in the lobby, the ceiling was restored o its original height of 19 feet, with a new concierge desk replacing the 1930’s mezzanine floor reception area. A new Victorian-style staircase was built, returning the entrance of the hotel to its original grandeur.

The Taylors consider themselves to be caretakers of the Weatherford Hotel and can now say that they have left the hotel better than they found it and through all of its history, it has remained one of the most renown hotels in Flagstaff. The only remaining project is an addition at the rear of the building to accommodate a new fire escape and elevator tower, planned for completion in the near future.

READ MORE ABOUT OUR HISTORY

WE LOVE TO SHARE NEW OFFERS AND EXCLUSIVE PROMOTIONS